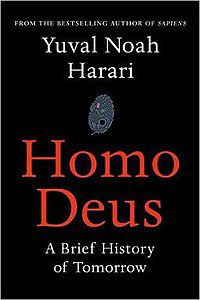 Yuval Noah Harari is a great storyteller. And he does a great job again Homo Deus: A History of Tomorrow, a kind of sequel to his widely acclaimed book, Sapiens: A Brief History of Humankind.

I came to this book with an expectation of some short to long-term predictions of what the future (historically-wise), and had a good surprise that this was not the case. Homo Deus mostly talks about the philosophical aspects of our culture, on the meaning of consciousness, and on the changes that have happened with religion and how it has moved from being god-centric to human centric, to name a few. And most of the time without making judgments into which of the options are better, just telling a story of how this has happened. And based on that, it gives some options of what the future may bring.

And I’ll stop here so I don’t spoil the book for you.

I highly recommend it.