Book Review – The Brain that Changes Itself 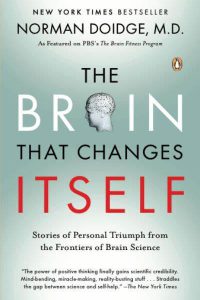 The brain is a very complicated system that we are still trying to understand. In the last decades the have been incredible leaps in this understanding, but we are just scratching the surface of an incredible machine that works in a way that we don’t understand, and doing so in a very efficient way. And yes, it has its many quirks and faults, but the closest machine learning and artificial intelligence system that we have are still far from being able to do what that mass of gray matter does inside our heads.

There are many theories on how and when the brain evolves and changes, and for many years we assumed that the brain of grown persons were static, had very little changes, and that it could not heal, or if it could, it would take very long for it to happen.

This book compiles multiple studies and long-term research projects that have turned this theory upside down. From teaching the brain to “see” in a completely new way, to understanding that pain is something the brain creates to keep you safe and that you can sometimes (and with a lot of effort) re-program the brain to stop creating this pain, and how practice inside your head is also practice.

Here are some interesting passages from the book:

This book covers a lot and makes you want to learn more and more about the subject. Highly recommended. Buy it from your prefered site.