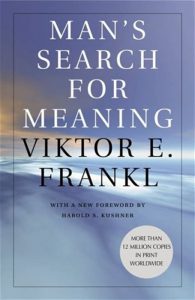 In this excellent mind-turning book, Viktor Frankl writes about the deeper meaning of life, and how important this is to all of us. Having lived through one of the toughest experiences in history – being in the holocaust, where people were murdered systematically – he found that people whose life had meaning survived (I’m obviously over-simplifying, but that’s what’s in my memory).

Franks was both a neurologist and psychiatrist, and what better place to learn about human brain and behavior that under the extreme experiences created by WW2 and the holocaust? What he learned became what Logotherapy, a new branch of psychotherapy that disagreed with the earlier ones created by Freud and Adler: “Life is not primarily a quest for pleasure, as Freud believed, or a quest for power, as Alfred Adler taught, but a quest for meaning. The greatest task for any person is to find meaning in his or her life.”

And how does one arrive at meaning? “As logotherapy teaches, there are three main avenues on which one arrives at meaning in life. The first is by creating a work or by doing a deed. The second is by experiencing something or encountering someone; in other words, meaning can be found not only in work but also in love… Most important, however, is the third avenue to meaning in life: even the helpless victim of a hopeless situation, facing a fate he cannot change, may rise above himself, may grow beyond himself, and by so doing change himself. He may turn a personal tragedy into a triumph.” Meaning can be both external and internal.

Did I say it is a great book? Get it from your favorite online store and enjoy.

Lastly, some great quotes I took from the book: